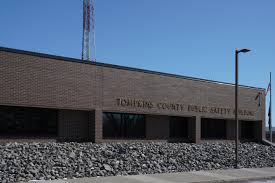 Tompkins County Facility
​     The Tompkins County jail provides a safe, sanitary, and secure place of detention for all persons committed to the facility. The corrections staff of 40 officers is the largest division of the Tompkins County Sheriff’s Office and supervises up to 90 prisoners. Some of the services made available for prisoners at Tompkins County are provided by the Mental Health Dept., the Probation Dept., the Alcoholism Council, AIDS Work, Offender Aid & Restoration, the Advocacy Center, the Jail Transition Program and the Community of Faith.
CONTACT INFO

Mark Barber and Don Brown
Director Don Brown was recruited for prison ministry in 1980 by Bob Johnson and began his service at Cortland County Jail. After meeting Pastor Doug Smith, Don moved to Tompkins County Jail representing Golden Key Prison Ministry at the former 40 bed facility on Front Street in Ithaca. In 1989, Don would continue the work at the new facility on Warren Road housing 90 prisoners. Now retired from the Chemistry Dept. of Cornell University, he lives with wife, Mindy, in King Ferry, New York. They have 4 children and 7 grandchildren. Don is a member of the New Testament Church of Peruville in Groton, NY.
​
In the early 90’s, Mark Barber was working hard to support his family in the Ithaca area. He noticed how one foreman at his job always seemed to have a wad of cash in his pocket. His curiosity got the best of him one day and he asked how he always had so much cash. The answer came with an offer to get in on the cash flow, “since you’ve got some land, how would you like to grow something for me?” Soon Mark was cultivating a crop of marijuana and occasionally driving a load down south in his pickup truck. He thought about getting caught but convinced himself that he would only get a slap on the hands because it was only “pot”. 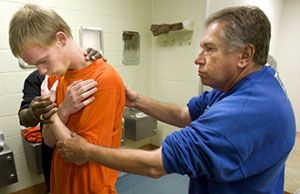 <<< Don Brown & Rev. Riney Whyte >>> Baptize 11 men in 2008
But when DEA (Drug Enforcement) came rudely knocking on his door, he found out that it would cost him 30 months of his life between DOC Boot Camp, 8 months in a supervised half-way house and months of home confinement. It was during that time that Mark really turned his life over to the Lord. In 2003, Pastor Doug Smith and Don Brown brought a presentation about prison ministry at Asbury Church in Lansing, NY. Mark was in the congregation that night and felt the Lord encouraging him to volunteer for the work at Tompkins County. He has now been co-laboring with Don Brown for 7 years at the jail. Mark operates Sunny Brook Builders in Ithaca, New York where he lives with wife Stephanie and son, Dillon. They attend First Assembly of Ithaca, New York where Mark is a trustee.
SERVICES