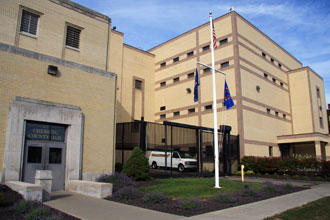 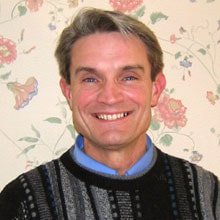 Chaplain Dave Knuppenburg
In 1985, David Knuppenburg, was on track for becoming a church pastor. But, as God often does, his life was directed onto an unexpected pathway. Shortly after returning from a Bill Gothard’s Pastor’s Conference, David was watching a local news report on television at his girlfriend’s (now wife) apartment. He watched the usual “perp walk” as the handcuffed young man is led into custody. But this time was different because David recognized this man as a friend from high school. He recalled the recent in-depth teaching he had received at the Pastor’s Conference on the work of ministry from Matthew 25:31-46.

​     The verse that particularly struck him was where Jesus had said, “…I was in prison and you came unto me.” (verse 36). That one phrase changed the course of David’s life. He went to visit his friend in the Chemung County Jail and shared with him the booklet, “Steps to Peace in Christ”. His friend asked Dave to see a friend that he met in jail and that friend had a friend and soon Dave was making weekly jail visits and on the path to prison ministry. He began preaching on Sundays at the jail and met George Keith and Ed Coby who were working with Pastor Doug Smith of Golden Key Prison Ministry. He worked with the superintendent of the jail to add Bible studies for men and women inmates as well as a Christ-centered addiction program and character-building classes. “Chaplain Dave”, as he has been known for 25 years now, feels that the work of the chaplain is “to be available as a role model of Christ, to help escort people on their spiritual journeys.” He also actively recruits and trains volunteers to fulfill the roles that God has called them to so he has a large group of active volunteers at Chemung County. Dave often meets men and women in the community whose lives were touched and enriched during their stay at Chemung County. David, wife Rayne, and their three children live in Millport, New York and attend Maranatha Bible Chapel of CMA in Horseheads, New York.
AFTERCARE 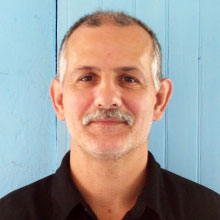 Coordinator Terry Batrony
Terry Batrony, who now serves as Aftercare Coordinator for Golden Key Prison Ministry, is a recipient of Chaplain Dave’s ministry. Here is Terry testimony in his own words: “After fifteen years, I can still remember my first meeting with David Knuppenburg. It was in a small five by ten foot room with steel mesh separating us and our every action exposed to the overseeing guards through the thick security glass. I could tell by the warmth of his smile and gentle tone of his voice when he said ‘hello’ how much he truly cared. Dave truly has a heart toward the inmate. During one of our many talks, I wondered why the Christians that I had met in life did not reflect Jesus like Dave did. He always found a way to give great value to me as a person.

By continually showing up for Bible studies, church services, one-on-ones as well as bringing books, Bibles, and other resources, Dave modeled trustworthiness, faithfulness, and integrity. He taught me and others to walk in the fruit of the Spirit by his example. Dave modeled a Christ-like life controlled by the Holy Spirit. Dave was not only my teacher, mentor and counselor, he was the only ‘Jesus’ I saw. He was, and is to this day, my dearest friend. It’s hard to believe that it has been 20 years since our first pivotal meeting.

​     Dave is the same person I met in jail so long ago. After these many years, we find ourselves friends and co-laborers, continuing to take the message of love, hope, and compassion into the jail. I thank God every day for allowing me to be discipled by this man of integrity.” Terry is as an important part of the weekly ministry of the Golden Key Chemung County Team and brings his personal experience to helping men and women transition back into their communities as Golden Key’s Aftercare Coordinator. He lives with his wife, Barbara, and attends Southside Alliance Church in Elmira, New York. You can read more of Terry’s story on the Aftercare Page.
SERVICES