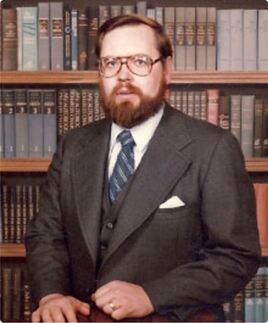 On October 9, 1960, Curtis Paul Carter walked the isle of West Windsor Baptist Church with his mother to receive Jesus Christ as his Savior and Lord.  Soon he was enrolled in the newly established Ross Corners Christian Academy when Christian school education was in its infancy in New York State.  He was cast in the roll of public speaking early on as the emcee for many school programs, in roles for school drama presentations, and as student council president.  At graduation he was on track to pursue seminary instruction to become a pastor when family circumstances altered his plans and he took a job as a carpenter apprentice for a local construction company.  He kept involved in the ministry by serving at The Turning Point Coffee House on Court Street in Binghamton for several years where he learned street witnessing and mentoring new converts.

In 1977, while still working in the construction field, he met and married Nancy Baldwin. They were invited to attend a church service at Christian Life Church in Waverly, New York.  When the current pastor of Christian Life was called to do mission work in Russia, Pastor Curt eventually become the pastor at the church in 1982. In 1989, after receiving In-Prison Coordinator training through Prison Fellowship Ministries, he conducted his first seminar in the Chapel of the Good Shepherd at Elmira Correctional Facility for about 300 men.   He also presented in-prison seminars and trained volunteers all over upstate New York.  In January 2000, Prison Fellowship hired Pastor Carter as Western New York Field Director.  He retired from Christian Life Church in February 2004 to focus more attention on prison ministry.  God was preparing him to meet Pastor Doug Smith of Golden Key Prison Ministry.  They met in August 2006, just weeks before Pastor Doug went home to be with the Lord.  In October 2006, Pastor Curt became interim director and then executive director of Golden Key in 2007.  At the same time Pastor Carter entered a year long course of study on Biblical Worldview led by Chuck Colson the founder of Prison Fellowship.

In January 2008, he graduated in the fourth “flight” of Centurions (now Colson Fellows) trained through the Colson Learning Center.  He also took a new position with Prison Fellowship’s Training & Learning Services Department as an Instructional Design and Developer.  He helped produce training/teaching materials for prisoners, volunteers and PF staff members as well as facilitating new employee training at the Lansdowne, VA office of PF.  In January 2009, due to the challenging financial conditions in America at the time, Pastor Curt and many PF staff members lost his job with Prison Fellowship . He now works full-time as Executive Director for Golden Key Prison Ministry bringing his years of prison ministry training and experience to Broome, Chemung, Seneca, Tioga and Tompkins County jails as well as Elmira  Correctional Facility.  In August 2010, Pastor Curt partnered with Bob Klock to bring a Christ-centered 12 step program to Broome County jail entitled “Celebrate Recovery”.